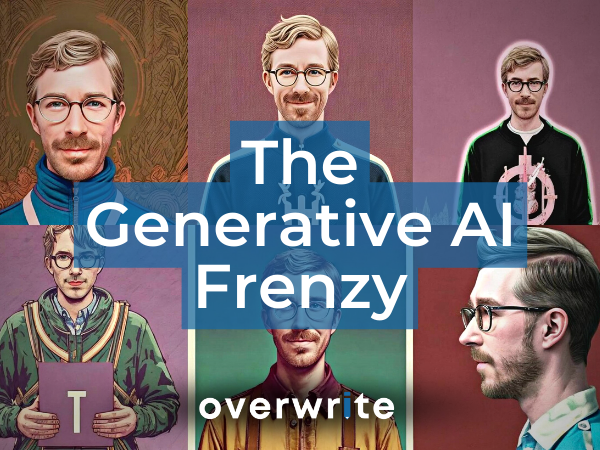 The buzz around generative AI today is deafening. No topic in the world of technology is attracting more attention and hype right now.

Generative AI refers to artificial intelligence that can generate novel content, rather than simply analyzing or acting on existing data.

The white-hot epicenter of today’s generative AI craze has been text-to-image AI.

It was the sudden emergence of these text-to-image AI models over the summer that catalyzed today’s generative AI frenzy: billion-dollar funding rounds for nascent startups, nonstop media coverage, and waves of entrepreneurs and venture capitalists hastily rebranding themselves as AI-focused.

It makes sense that text-to-image AI, more than any other area of artificial intelligence, has so captivated the public’s imagination. Images are aesthetically appealing, easy to consume, fun to share, ideally suited to go viral.

And to be sure, text-to-image AI is incredibly powerful technology. The images that these models can produce are breathtaking in their originality and sophistication. Image-generating AI will transform industries including advertising, gaming and filmmaking.

But make no mistake: current buzz notwithstanding, AI-powered text generation will create many orders of magnitude more value than will AI-powered image generation in the years ahead.

The Power of the Written Word

Language is humanity’s single most important invention. More than anything else, it is what sets us apart from every other species on the planet.

Almost nothing about modern civilization would be possible without language.

To illustrate the depth and breadth of the coming transformation, let’s walk through some example applications.

From Sales to Science

The first true “killer application” for generative text, in terms of commercial adoption, has proven to be copywriting: that is, AI-generated website copy, social media posts, blog posts and other marketing-related written content.

AI-powered copywriting has seen stunning revenue growth over the past year.

Jasper, one of the leading startups in this category, launched a mere 18 months ago and will reportedly do $75 million in revenue this year, making it one of the fastest-growing software startups ever. Jasper just announced a $125 million fundraise valuing the company at $1.5 billion. Unsurprisingly, a raft of competitors has emerged to chase this market.

Copywriting is just the beginning

Generative AI will transform the world of customer service and call centers, across industries: from hospitality to ecommerce, from healthcare to financial services. The same goes for internal IT and HR helpdesks.

Language models (like overwrite.ai) can already automate much of the work that happens before, during and after customer service conversations, including in-call agent coaching and after-call documentation and summarization.

Soon, paired with generative text-to-speech technology, they will be able to handle most customer service engagements end-to-end, with no human needed—not in the stilted, brittle, rules-based way that automated call centers have worked for years, but in fluid natural language that is effectively indistinguishable from a human agent.

To put it simply: nearly all of the interactions that you as a consumer will need to have with a brand or company, on any topic, can and will be automated.

For some lower-stakes use cases—say, writing outbound sales emails or website copy—the technology will soon be advanced and robust enough that users motivated by the potential productivity gains will feel comfortable automating the application end-to-end, with no human in the loop at all.

At the other end of the spectrum, some safety-critical use cases—say, using generative models to diagnose and propose treatments for individual patients—will for the foreseeable future require a human in the loop to review and approve the models’ output before any real action is taken.

Within months, expect industry leaders like OpenAI and Cohere to release new models that represent dramatic, step-change improvements in language capabilities compared to today’s models (which themselves are already breathtakingly powerful).

Over the longer term, the trend will be decisive and inevitable: as these models get better, and as the products built on top of them become easier to use and more deeply embedded in existing workflows, we will hand over more responsibility for more of society’s day-to-day functions to AI, with little or no human oversight. More and more of the use cases described above will be carried out end-to-end, in a closed-loop manner, by language models that we have empowered to decide and act.

This may sound startling, even terrifying, to readers today. But we will increasingly acclimate to the reality that machines can carry out many of these functions more effectively, more quickly, more affordably and more reliably than humans could.

This story has been published from an article in Forbes published on 6th November 2022.

For informative news and views on the world of real estate, proptech and AI, follow overwrite on Instagram and LinkedIn, and keep up-to-date with our weekly NewsBites blog.