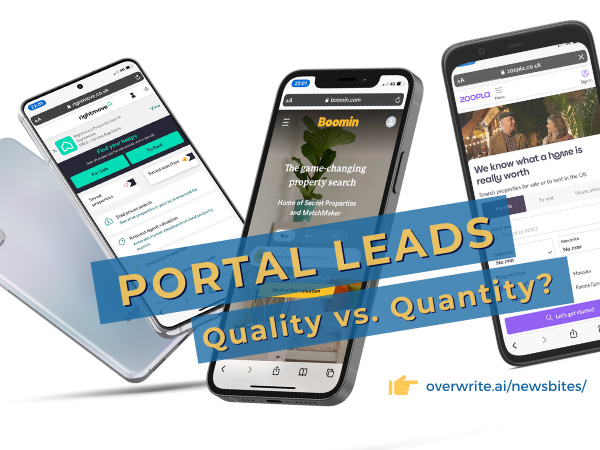 What’s more important, lead quality or lead quantity? It’s an age old question that I’m sure you’ve asked yourself many times. And it’s one that’s got some of the UK’s property portals trading hammer blows with each other.

Is your portal sending you cold leads, or leads so warm they could slice through butter?

Back in April we reported on a move by UK portal, Zoopla, intended to shift the UK’s fierce portal war in its favour. Zoopla spent millions of pounds on a marketing blitz with one clear objective; to become the UK’s market-leading real estate marketplace, the Top Dog.

But the other portals on the scene are no pushovers, and they don’t pull their punches. Spearheading the counter attack is one of the industry’s latest challengers, Boomin.

As anyone who works in real estate will know, a scrap over leads can get feisty.  And in the latest war of words, Boomin has sucker-punched Zoopla, criticising it for being over-optimistic in its “definition of leads” sent to agents.

In a recent industry article, Boomin voiced scepticism over Zoopla, Rightmove and OnTheMarket’s lead classification and data. Now they have gone as far as to publicly call Zoopla out on the quality of what it claims qualifies as a lead.

It’s not surprising that portals are being scrutinised for exactly how much value their leads add, considering the new technology now able to intelligently analyse traffic and lead generation.

The market disruptors are clearly taking full advantage of opportunities which new PropTech is enabling, and enjoying a fairly strong start. Since it stepped onto the field earlier this year, Boomin, the latest portal on the block, has been steadily expanding its cavalry. Some 6,800 agents have signed up, along with the number of agency branches using the new portal reaching 7000. And it’s burst out of the gates in a fighting mood.

“They count leads as any single contact, whatever the quality – that counts as a lead and an opportunity. We want to build more quality of engagement which means that agents can build longer-lasting relationships.

“If we copied how other portals distribute leads we could distribute a significant number. But we don’t distribute them at all until agents are instructed … What we want to do is get quality leads that we can measure the performance of and measure the value of. They will grow over time.”

Even before they came to market less than 6 months ago, Boomin has been throwing shade at the industries front runners. In February, CEO Michael Bruce launched a stinging attack on Rightmove.  In an open letter to agents, Bruce criticised Rightmove, and the industry, for its lack of competition, transparency and fairness, suggesting it has contributed to “Market Failure”.

Proof in the pudding?

However industry veterans Zoopla aren’t showing any signs of stress. In response to Boomin, Zoopla hit back with a data-heavy uppercut, that included reports of massive engagement of its various new app features to support growing lead numbers.

In a statement issued in early August, Zoopla claimed to be generating more leads than ever, with a rapid increase in click-through rates on its ‘In search’ feature. It also reported leads up 58% year on year, and a 30% increase in valuation leads.

“Home hunters are 37 per cent more likely to contact an estate agent as a result of a search on the new results page while the likelihood of users sending a lead from the listing detail page has increased by 22 per cent.”

Healthy Rivalry or Survival of the Fittest?

With the UK’s real estate portals having a combined market cap near to £10 billion, it’s hardly a surprise that the fight for the biggest slice of portal pie is getting messy.

But a little competition never killed anyone, right? And it’s a well-known fact that competition encourages people to do better. To work harder. To offer something different.  So if all this scrapping means that house-hunters get a better end product, and that portals focus their agent-centric service on stronger lead quality, then it’s a win-win.

Take a second to tell us what type of leads you value most.