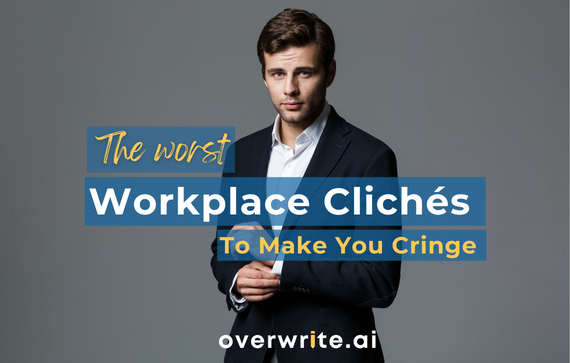 If I had a dollar for every smug muppet who dropped a cringe-worthy cliché on me over the years, I’d be a millionaire.

Here’s a list of overused office clichés’ that have no business being used in business.

They belong in the bin.

Wait, you weren’t being honest until now?

2. With all due respect

Anytime a person starts a sentence with this, they’re about to disrespect you.

Translation: I want to know what you know, and am too lazy to look it up myself.

You’re trying to be edgy and trendy; we get it.

5. Let’s see if we have the bandwidth

This typically means the person doesn’t have the time, money, or skills to do what you’re asking, but doesn’t want to admit it. It’s a stall tactic.

6. The fact of the matter is

This basically says, “What you’ve presented until now was not fact and I’m about to correct you.”

Anybody can think. But it takes a true idiot to ideate.

For everyone who’s not American, this is a baseball term. Good luck figuring out who or what ‘base’ is supposed to be?

The last time I pushed the envelope, it ended up in the mailbox.

The point of the pipeline is that when something goes into it, it’ll come out somewhere else entirely.

So, we’re going to talk about this later, then…

We can take it offline, but the conversation is going to be pretty much the same.

It’s not fair if you’re not fair.

This was the “cool” thing to say five years ago. Now it’s been drowned out (pardon the pun).

Yes, that’s true. It definitely “is what it is.” But the question is, what is it?

Someone who is talking about low-hanging fruit may not have much experience “reaching for the stars” (pun intended).

Everybody wants to “move the needle,” but without actionable advice this is a waste.

19. Think outside the box

Chances are high that the person who’s telling you think outside the box, is somehow firmly entrenched in a box of their own.

You mean specific? Why don’t you just say “specific”?

21. This really has legs

It may have legs, but can it run?

Raising our standard is great. But how’re we gonna keep it there?

If you’re vegetarian, substitute for eggs. Or don’t use at all.

Your door is open, except when its closed.

A bit of Blue Sky Thinking

Let’s avoid smug phrases and stick to common sense uses of language. Otherwise we’ll all end up being nothing more than a bunch of smug muppets.