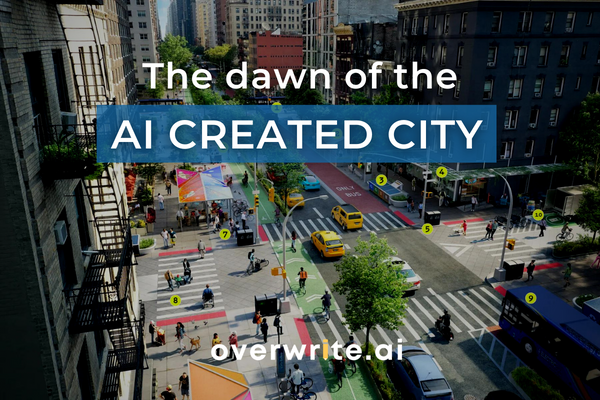 Design pioneers and architectural AI visionaries have long thought about automating the creation of our environments. Now the technology is catching up to their ideas.

A radical shift into AI-assisted design is taking hold, with implications that could radically transform the feel and function of the places we inhabit.

Completely automated design is not quite there yet. This crop of generative, AI-assisted tools is rather new. But there are signs that we could be on the cusp of a revolution in how our buildings and cities are created.

Will these begin to take on a homogeneous shape, recognisable as AI-planned spaces? And is this the beginning of the ‘copy-and-pasted’ city – or do we already inhabit those, with the identical new-build properties that seem to crop up everywhere?

On the other hand, could AI accelerate more of the same – a ruthlessly efficient approach to stuffing more people into buildings and maximising rents. Whatever happens, AI assisted design appears set to radically change the future of architecture.

And nudging this AI-assisted world into reality are new tools backed by Silicon Valley, such as Delve, owned by Google subsidiary Sidewalk Labs, and SpaceMaker, which was recently acquired by computer-aided design giant Autodesk for $240m (£196m).

Unlike the painstakingly crafted line-by-line processes normally associated with architecture proposals, these tools allow the user to view and play with a huge range of variables – prioritising or adjusting nuances we may take for granted, like noise levels, temperature or window views – and then generating design options.

With the traditional approach, planning teams are limited by their time and their tools.

But by using AI-assisted tools, planners can explore hundreds, if not thousands of options, with their subtle differences illustrated on a 3D map so various stakeholders can view progress or collaborate as plans evolve.

SpaceMaker co-founder and CEO Håvard Haukeland says that AI assisted design can virtually eliminate what those in the industry colourfully term ‘Oh Sh*t Moments’: when a design has already been fixed, but the team had forgotten to carry out essential tasks like noise analysis, thereby potentially setting project deadlines back – sometimes quite literally to the drawing board.

Putting it into Context

But it’s not without its complexities or drawbacks. With all the variables, location-specific considerations, the context-dependent nature of floorplans for example, and the algorithmically impossible-to-pin-down overall ‘feeling’ of a place, it may be some time yet before machines are helping to bring about that renaissance

For now, it is the nuts-and-bolts stuff where the latest AI-generative tools excel. The design is not quite end-to-end – meaning, pushing a button won’t instantly generate you a building or district to your liking.

But even these optimisations have the potential to change the look and feel – and function – of spaces.

Being able to analyse, calculate and map predicted temperatures, for instance, could help developers avoid creating urban heat islands, and create cooler conditions for residents as buildings and cities evolve.

And as sustainability becomes a more pressing concern, it may be proven that our approaches to buildings and cities are woefully inadequate – and that AI-imagined geometric models surprise designers with the optimised shapes they take.

In time, as technology marches forward, it’s an exciting thought for what new, aesthetic forms may crystallise.

So, determining the future with algorithms needs to be considered “very carefully”. But more design options and therefore more variety can hardly ever be a bad thing.

If you look at history, he adds, revolutions in architecture have occurred across thousands of years and in the end, there’s always something new, better, or smarter that builds on the past.

Take for example Saudi Arabia’s radical plan to build a linear city, branded ‘THE LINE’. It rethinks everything we know about how people live, work and play. A 170 km-long vertical city, designed around people, rather than cars. It describes itself as “A revolution in urban living. A city that delivers new wonders for the world.”

“You want to encourage positive mutations and that’s what the rapid processing and multiple iterations of AI and machine learning make possible,” Haukeland adds. “But also, to ensure that the output is intelligent, and not simply a reflection of the limitations of the inputs.”

If AI can take the more mechanistic day-to-day activities of planners and designers, and “autocomplete” some of the laborious processes, there are great advantages to this.

But designers will have to tread carefully and remain conscious of algorithmic bias.

Flair over form for the foreseeable

Imdat As, architect and co-editor of The Routledge Companion to Artificial Intelligence in Architecture: wonders what designers would work on if AI were to produce 90% of the buildings.

“The top 10 designers – the Zaha Hadids, and so on – will always be there, with new ideas, new aesthetics. Those will be the designers who come up with a new design idea,” he says.

“And what if they trained in-house AI systems? Instead of, say, 10 buildings a year, they might build a million, all over the world. The power of AI for an architectural company could be amazing. The business structure could be: if you use my AI system, you pay royalties. It could change architectural practice models. I think there will be those types of changes.”

Imdat As, architect and co-editor of
The Routledge Companion to Artificial Intelligence in Architecture

Stephen Barrett, partner at British architectural firm Rogers Stirk Harbour + Partners, believes that AI will be able to take the more mechanistic day-to-day activities of planners and designers, and “autocomplete” some of the laborious processes. There are “great advantages” to this, he says: it frees up time and space to work on the interesting stuff, to innovate and create.

“If you took a city like Paris and ran that as an existing data set, you’d have more Paris,” he comments, “which is not a bad thing. But would you ever have had a Pompidou Centre?”

One thing does, though, seem certain. Given the efficiency gains, AI-assisted design will play an increasingly important role in that future planning, developing, building.

Edits have been made to images and headline.

Tamlin Magee writes for Raconteur (The Times and The Sunday Times)

This story has been published from an online article on 26th August 2022.