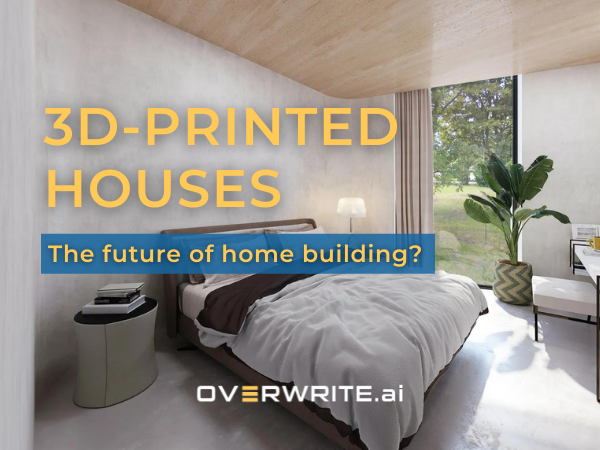 Imagine living in a house that was built in a matter of hours, at the click of a button, involving a single, computer-operated machine. Add to the mix, affordability, sustainability and cutting-edge design, and you’ve got yourself a brand new, 3D printed home.

15 years years ago, a house made by a giant concrete-spitting printer was a left field concept, limited to the domain of the imagination. Even now, most people won’t have seen inside these pretty incredible digital constructions.

But with growing worldwide housing shortages, and a post-pandemic housing boom that’s left many first-time buyers priced out of the housing market, 3D printed homes are no longer just an idea on paper.

They’re being printed, they’re being lived in and they’re shaking up the structure of traditional house building.

As populations around the world continue to surge, and access to affordable housing is becoming an increasingly critical issue, are 3D printed houses really a viable solution for the future of housing construction?

With its cost-effective approach to construction, timed with a shift towards more sustainable living, and wide-base of latent homebuyer demand, the potential is starting to gain weight. And with companies such as Ikea backing the movement, it might not be long before individuals and investors worldwide, begin to take even more notice.

The printing process uses a digital file to print a 3D object layer by layer. This means that a new home can be built  in record time and at low cost. This opens up exciting possibilities for the future of homebuilding. The process of home printing uses up to 30% less material than traditional homebuilding techniques, saving waste and creating a more sustainable construction process in the long-term.

In Europe and America there is already an adoption towards this digital approach to construction. Chronic housing shortage in countries like The Netherlands and the US, has meant Governments have had to seek innovative ways to tackle housing shortages. With an estimated 2.7 million new homes needed in California by 2025, 3D printed housing is enjoying increased interest from planners, developers and homeowners.

The European product is a collaboration between Eindhoven’s Technical University and construction company, Project Milestone. It complies with all Dutch construction codes, and has recently seen its first tenants move in.

And the desert landscape of California’s Coachella Valley will soon be home to the first US neighbourhood comprised entirely of 3D-printed houses.

Whilst a 3D house is definitely strong and durable, it should be noted that they are only estimated to last around 50-60 years, as many have timber elements that are more susceptible to decay over time, if not treated or maintained properly. So if you’re looking for a family home that’ll span generations, 3D printed houses probably won’t be your first option.

3D printed homes are quicker to build than traditional houses. The developers and designers behind the projects believe the technology can bring unprecedented speed, scale and style to housing design.

It’s relatively inexpensive because of the materials used. For example, concrete or clay is usually cheaper than buying brick or slate. Another reason for lower costs, is because they can be constructed with minimal labour.

Because you don’t need the fossil fuels that traditional home construction requires so it’s also a more environmentally friendly way of constructing a home.

As more of us are migrating to centres of economic activity, we are developing megacities that are often blighted with poor inner-city areas and massively evident wealth gaps. If the use of 3D design and home printing can support low-income communities, empower first-time buyers, and gentrify inner-city areas while curbing urban sprawl, we can expect the overall living standards in our mega cities to improve.

As we mature into our 21st century, addressing climate change and economic inequality are, or at least should be, priorities on our collective socioeconomic agenda. To this end, innovative solutions like 3D printing could be the answer to many plaguing questions.

So whether you join the early-adopting homeowners, are a mere passer-by on the street, or start selling them as a real estate agent, expect to see 3D printed homes soon become part of day to day life.