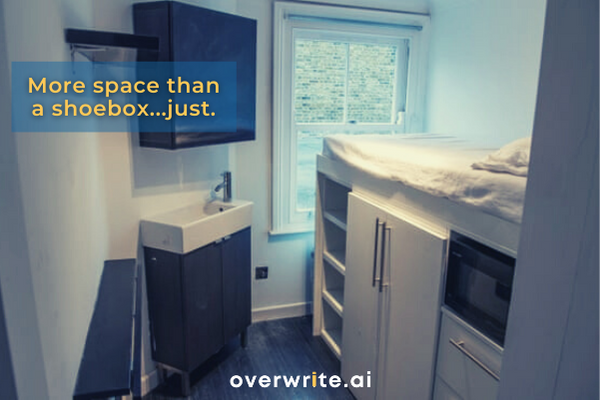 LONDON. Love it or hate it. It’s the world’s Capital city, and everyone knows it.

The property packs in a bed, storage cupboard, a wash basin, a microwave under the pillow, and a wet-room with a showerhead above the toilet.

It’s believed to be the capital’s smallest ever property. Smaller than most domestic helper’s rooms in the average Dubai home.

The space between the bed and the wall is wide-enough for an average arm-span, and it comes with a foldout table for eating or working on.

But you can forget about cooking. There’s no stove included.

This bolthole in a box, has been rented for £800/month (US$ 1,080) to a tenant who lives elsewhere and uses it as their London pied-a-terre for one or two nights a week.

Despite an 80% excess bid, the investor that bagged it is banking a +10% gross yield, meaning they can expect payback within 10 years.

Microproperties like this represent a growing trend of tiny homes in dense metropolises, where space constraints and labour shortages are tightening supply, forcing rents and prices to increase.

Typically London’s developers would convert flats into rooms. Now the socioeconomics of demand have pulled a 180. Developers, ever in tune, are transforming rooms, however small, into flats.

Is this a red flag, marking an asset price bubble that’s about to pop?