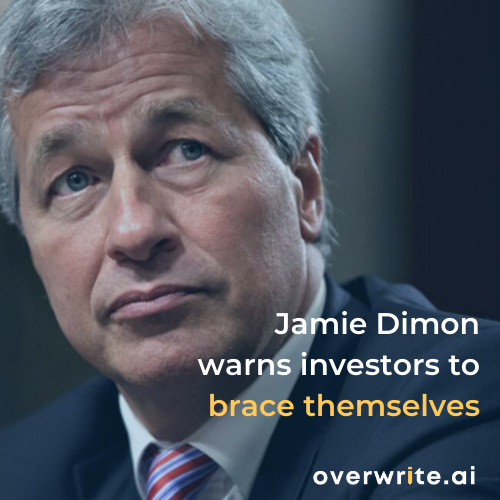 JPMorgan Chase CEO Jamie Dimon says he is preparing the biggest U.S. bank for an economic hurricane on the horizon and advised investors to do the same.

“You know, I said there’s storm clouds but I’m going to change it … it’s a hurricane,”

Dimon, speaking at a financial conference in New York on Wednesday, says that while conditions seem “fine” at the moment, nobody knows if the hurricane is “a minor one or Superstorm Sandy”.

“You’d better brace yourself,” Dimon told the roomful of analysts and investors. “JPMorgan is bracing ourselves and we’re going to be very conservative with our balance sheet.”

Stocks have been hammered as investors prepare for the end of the Federal Reserve’s cheap money era. Inflation at multidecade highs, exacerbated by supply chain disruptions and the coronavirus pandemic, has sown fear that the Fed will inadvertently tip the economy into recession as it combats price increases.

While stocks bounced from a precipitous decline in recent weeks on optimism that inflation may be easing, Dimon seemed to dash hopes that the bottom is in.

“Right now, it’s kind of sunny, things are doing fine, everyone thinks the Fed can handle this,” Dimon said. “That hurricane is right out there, down the road, coming our way.”

There are two main factors that has Dimon worried: First, the Federal Reserve has signaled it will reverse its emergency bond-buying programs and shrink its balance sheet. The so-called quantitative tightening, or QT, is scheduled to begin this month and will ramp up to $95 billion a month in reduced bond holdings.

“We’ve never had QT like this, so you’re looking at something you could be writing history books on for 50 years,” Dimon said. Several aspects of quantitative easing programs “backfired,” including negative rates, which he called a “huge mistake.”

Central banks “don’t have a choice because there’s too much liquidity in the system,” Dimon said, referring to the tightening actions. “They have to remove some of the liquidity to stop the speculation, reduce home prices and stuff like that.”

The other large factor worrying Dimon is the Ukraine war and its impact on commodities, including food and fuel. Oil “almost has to go up in price” because of disruptions caused by the worst European conflict since World War II, potentially hitting $150 or $175 a barrel, Dimon said.

“Wars go bad, [they] go south in unintended consequences,” Dimon said. “We’re not taking the proper actions to protect Europe from what’s going to happen to oil in the short run.”

Last week, during an investor conference for his bank, Dimon referred to his economic concerns as “storm clouds” that could dissipate. Presentations from Dimon and his deputies at the all-day meeting have bolstered JPMorgan shares by giving greater detail on investments and updated figures on interest revenue.

But his concerns seem to have deepened since then.

During the response to the 2008 financial crisis, central banks, commercial banks and foreign exchange trading firms were the three major buyers of U.S. Treasurys, Dimon said Wednesday. The players won’t have the capacity or desire to soak up as many U.S. bonds this time, he warned.

“That’s a huge change in the flow of funds around the world,” Dimon said. “I don’t know what the effect of that is, but I’m prepared for, at a minimum, huge volatility.”

One step the bank could take to gird itself for a coming hurricane is to push clients to move a type of lower-quality deposit called “non-operating deposits” into other places, such as money market funds, for example. That would help the bank manage its capital requirements under international rules, potentially helping it absorb a surge in bad loans.

“With all this capital uncertainty, we’re going to have to take actions,” Dimon said. “I kind of want to shed nonoperating deposits again, which we can do in size, to protect ourselves so we can serve clients in bad times. That’s the environment we’re dealing with.”

Banks having a “fortress balance sheet” and conservative accounting are the best protections for a downturn, Dimon said.

The bank has shied away from servicing a lot of federal FHA loans, he said, because delinquencies could hit 5% or 10% there, “which is guaranteed to happen in a downturn,” Dimon said.

Dimon went on a tear during the hourlong session, barreling through topics like a “greatest hits” of his observations and gripes, often letting loose with profanity.

He lambasted investors for voting along with proxy advisors like Glass Lewis, which has disagreed with JPMorgan’s board on recent matters including executive compensation and whether the bank should separate the chairman and CEO roles in the future.

“Shame on you if that’s how you vote,” Dimon said. “Seriously, you should be embarrassed. Do your own homework.”

Companies are being driven out of public markets “because of litigation, regulation, press, cookie-cutter governance,” he added.

Meanwhile, other critics often conflate stakeholder capitalism for being “woke,” Dimon said.  “I am a red-blooded, free market capitalist and I’m not woke,” he said.

This story has been published from an article on Wednesday 1st June 2022, without modifications to the text. Only the headline and has been changed.