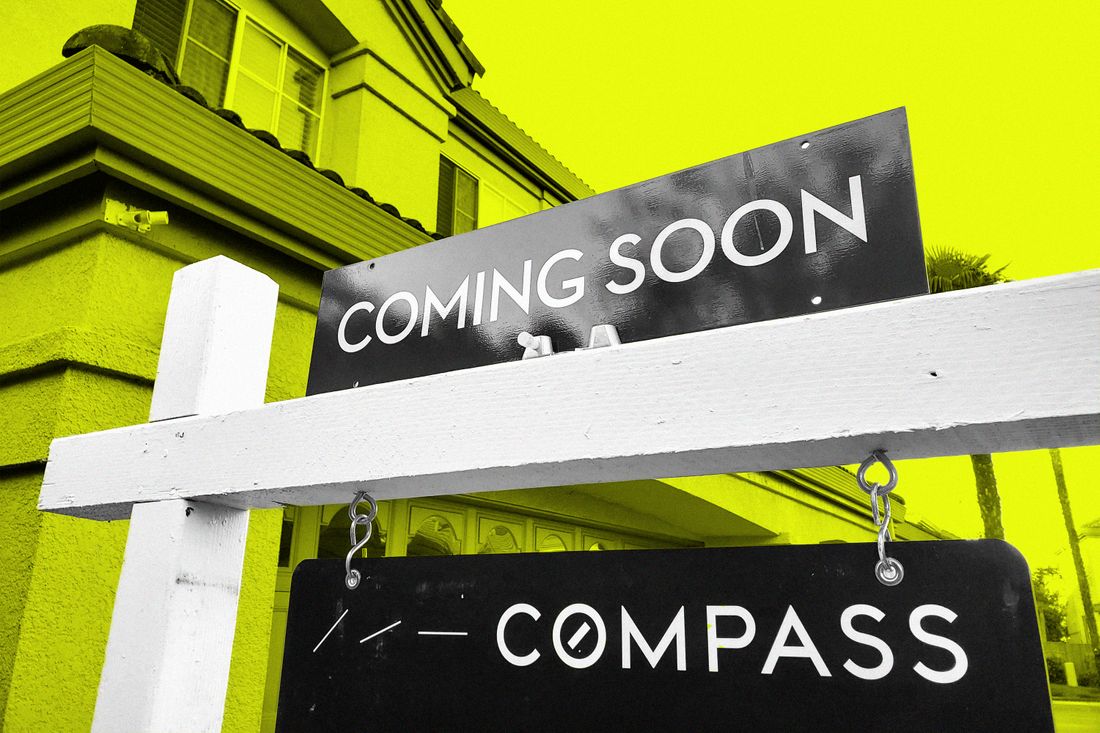 By Reeves Wiedeman writing for CURBED

Last week, a deeply confused swath of the real-estate universe had a chance to get an answer to a long-running mystery: Is Compass an industry-disrupting technology platform, or just an old-fashioned brokerage with good branding and a lot of cash?

The New York–based company made its stock market debut Thursday after an eight-year sprint in which it went from a few agents in New York to more than 19,000 across 45 cities, becoming the second-largest residential brokerage in the country. SoftBank’s Vision Fund and a few other investors had stuffed the company full of venture capital to fuel its expansion and create the impression that the company was the tech-forward future of real estate. Skeptical observers saw Compass more like a residential analogue to WeWork — a well-financed, stylish start-up with a business model that, when you squinted past the marketing, didn’t seem all that different from what came before and certainly didn’t merit such a lofty valuation. The IPO was an opportunity for disinterested investors to assess the shares and would provide clarity. And yet the market’s verdict, in the hours after Compass’s founders rang the opening bell, was a resounding We’re not sure.

Let’s start with the positive for Compass: Its new $7.4 billion market cap is roughly four times larger than that of Realogy, a holding company that owns Century 21, Coldwell Banker, and Corcoran, among others, and which has twice as much revenue as Compass. This valuation suggests that the mere possibility of disrupting the multitrillion-dollar housing market, at a moment when the competition for homes couldn’t be hotter, was enough to make investors want a piece of Compass at a premium.

But $7.4 billion is, in many ways, a disappointment. A day before going public, Compass and its underwriters, sensing resistance from investors, announced they were slashing the company’s hoped-for valuation of $10 billion — a little like a broker chopping the price on a Brooklyn brownstone on the eve of its open house after hearing chatter that it wouldn’t get any bids at the asking price. (Roughly a third of the new shares were set to be purchased by SoftBank, Compass itself, and the family of one of its co-founders.)

So, what to make of Compass? Robert Reffkin co-founded the company in 2012 after running a gauntlet of American upper-crust institutions: an undergrad degree and MBA from Columbia, followed by stints at McKinsey, Lazard, a brief time in the George W. Bush administration, and eventually Goldman Sachs, where he served as chief of staff to future Trump economic advisor Gary Cohn. Worth some $500 million after the IPO, he is now among America’s wealthiest Black entrepreneurs and has said that he hopes to run for mayor of New York one day. (To eliminate any infinitesimally lingering concern that Reffkin is an underachiever: He has raised more than $1 million for various charities by running marathons in all 50 states.) From Compass’s earliest days, he was insistent that it wasn’t a real-estate company. His co-founder, Ori Allon, was an Israeli tech entrepreneur who sold his first start-ups to Google and Twitter and once posed alongside Reffkin in a T-shirt bearing his Twitter handle. Allon told the Verge in 2012 that he was done creating small companies to sell to other companies and instead wanted “to build something really, really big.”

The idea, broadly speaking, was to devise a “human network” (at the time, Adam Neumann was pitching WeWork as “a physical social network”) that would change the way people bought homes. Urban Compass, as the company was known in its first iteration, aimed to be a one-stop shop for New York apartment-searching, and Reffkin and Allon hired a team of brokers who weren’t called brokers. They were “neighborhood specialists.” Rather than receiving commissions, they received full-time salaries, while Urban Compass promised to take lower fees than a traditional broker.

It didn’t work. The best agents, especially those who worked on home sales, rather than rentals, still wanted to work on commission and wouldn’t join the firm. In 2014, the company pivoted: Instead of eliminating the need for brokers, the rebranded Compass would embrace them, creating a suite of technologies — “AI-Driven Renovation Visualization,” “AI-Driven Client Prospecting Recommendations,” open-house planning tools — that would make brokers more efficient, allow them to push through more sales, and ultimately make everyone more money.

But the true pivot was toward a start-up model that has proven its merits in a variety of industries — drowning your less-capitalized competitors in cash. Compass has lost more than a billion dollars — numbers that would have been nearly unthinkable for a start-up a decade ago, but which wouldn’t even make an executive at Uber or WeWork blush. The cash fire was enabled by SoftBank and others, who invested more than $1.5 billion, a large chunk of which has gone toward buying market share. To move into new areas, Compass has made a habit of simply buying existing local brokerages and subsuming them. It has poached top brokers from other agencies by offering equity, a larger cut of every commission, an assistant, and a bespoke logo produced by the company’s marketing team, among other perks. The pitch has tended to work, even if the rapid expansion could be problematic (picture a poster-size advertisement featuring two young, white, hair-gelled brokers in suits, grinning on a brownstone stoop, above the word “HARLEM”) and has led to numerous lawsuits from competitors alleging nefarious poaching tactics.

The tech platform was part of the Compass pitch, too, and the company claims that 88 percent of its agents use its software at least once a week. What isn’t clear is how much good the tools actually do. A young agent, just starting out, might find them useful, but a good broker can walk into an apartment and immediately tell you how much it’s worth without an algorithm. Plus, what most buyers and sellers want most of all is someone to hold their hand: A broker’s ultimate skill is in convincing people to make one of the biggest financial transactions of their life.

What Compass did offer to the brokers it recruited, beyond financial promises, was a premium brand. While probably no one has ever chosen to buy through Coldwell Banker because they liked the logo, the ethos at Compass was to build the Nike of real estate. In certain corners of Cobble Hill and Silver Lake, a Compass sign came to signify what kind of home was inside: sophisticated, tasteful, architecturally and aesthetically aligned with a sleek sans serif font. (Many other agencies rebranded after Compass’s emergence: In 2018, Pentagram, the legendary design firm, was brought in to modernize both Halstead and Brown Harris Stevens.) Image is more or less everything to high-end brokers, and a well-branded agency with a tech-forward persona was at least as practically useful as some code that could produce “AI-Driven Renovation Visualizations.”

Looking at the S-1 document Compass filed with the SEC, I was transported back to the fall of 2019, when WeWork tried to go public. In the aftermath of that implosion, Compass’s chief financial officer sent an email to employees insisting that their company was different. And yet Reffkin began the S-1 by talking about how he started the company for his mom, a former real-estate agent — the kind of personal touch any good broker adds to a sale. Compass opened the document with a series of sleek photographs showing smiling people in front of laptops at dining tables in well-appointed homes, as if they were about to DocuSign a lease or loan document. This level of storytelling was, perhaps, necessary given the particulars of the underlying business. On paper, Compass looks like a traditional brokerage, albeit one with huge losses, and it leaned heavily on pumping up its tech bona fides — the word “platform” appears in the S-1 286 times. I couldn’t help but notice that Compass has no board members from the real-estate world, a blind spot it shared with WeWork. (The Compass board does include the CEO of a luxury digital-media company and the CFO of LinkedIn.) I’ll note briefly that the board of directors at Theranos also had no doctors.

The Compass IPO was buoyed by two pandemic booms — home sales are up, as is the market for hot young tech-centric companies. Even WeWork is trying it again. The global financial system is sloshing with liquidity, and newbie investors are stuffing their stimulus checks into Robinhood accounts rather than putting them toward a mortgage that feels unaffordable. Stocks at the nexus of real estate and tech (Redfin, Zillow, and Opendoor) have had a good pandemic, and multibillion-dollar valuations loom for Dom, a start-up that digitizes home-sale closings; Hippo, which offers insurance; and OfferPad, which is attempting to streamline the buying and selling process. Side, a direct Compass competitor with a broker-focused platform of its own, just went from a valuation of $160 million two years ago to $1 billion, despite the fact that the company has annual revenue of roughly $30–$50 million.

While all of these companies have promised to disrupt the home-buying industry in one way or another, none has dramatically changed the business. Compass is no exception. Unless you care about selling your home through a broker who hands out sleeker-than-average business cards, the consumer-facing process of working with Compass is scarcely different from that of any other brokerage. If Compass hopes to reach profitability, it will face pressure to stop lavishing its agents with incentives. In a widely circulated investor note, David Trainer, an analyst at New Constructs, wrote that “Currently, the company looks more like a traditional brokerage with flashy marketing, whose only advantage is a virtually unlimited ability to burn cash” and added “SoftBank needs this IPO more than investors do.” Many of the hot real-estate stocks have faded as the far side of the pandemic comes into view and fears of housing frothiness emerge. On Monday, Compass stock took a nosedive and dropped in value by more than 10 percent. The market’s lukewarm response to Compass indicates investors are willing to give it a chance. But it’s now hard to see the company as anything more than the latest execution of a modern business playbook: Why disrupt an industry when you can simply buy into it?

This story has been published from an online news feed without modifications to the text. Only the headline and has been changed.

OVERWRITE.ai is a world first, user-friendly B2C platform that allows estate agents to instantly auto-write curated marketing descriptions, creating efficiency for them and their business.