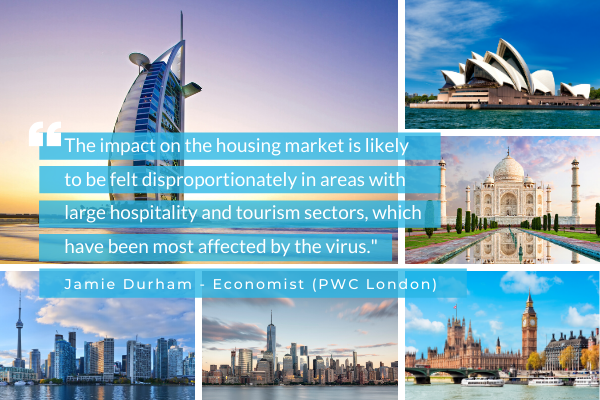 Home prices in Australia, India, Dubai, Britain, Canada and US forecast to fall this year and next under worst-case scenario

by Rahul Karunakar for Reuters

BENGALURU (Reuters) – The outlook for major global housing markets looks subdued, with high unemployment from the coronavirus pandemic and lockdowns and low immigration the biggest hurdles over the coming year, according to a majority of analysts polled by Reuters.

The coronavirus has killed more than 480,000 people worldwide, infected about 9.3 million and left many millions jobless. It has also pushed the global economy into a deep recession with the rebound expected to be slow and long as the pandemic still spreads in stages.

That comes despite an unprecedented amount of fiscal and monetary stimulus, sparking a rally in stock markets from late-March troughs, along with steady re-openings of many economies from lockdown.

While average home prices in a few countries polled were forecast to rise this year or next or both, fears of a prolonged drop in activity increased in the June 9-24 global poll of more than 100 property market experts compared with just three months ago.

With several risks still at play, house prices in Australia, India, Dubai, Britain, Canada and the United States were forecast to fall this year and next under a worst-case scenario.

“Our general view is that prices across most major markets will fall, probably around 5%…and in some it could be more significant,” said Liam Bailey, global head of research at Knight Frank in London.

“The risks are to the downside. The big thing that we don’t know is the potential for a second outbreak and lockdown. And if we get another significant lockdown, then there is every chance that prices would fall again.”

The U.S. housing market, at the epicenter of the previous financial crisis that led to a global recession, was expected to remain a bright spot and defy the economic downturn, supported by record low mortgage rates and limited supply.

While the availability of affordable homes has been a chronic problem there for several years, the main risk is unemployment, which has jumped from record lows to record highs within a couple of months and is expected to remain well above pre-COVID levels until at least 2022.

High joblessness is the biggest hurdle housing markets will face over the coming year, according to two-thirds of more than 100 analysts across the countries surveyed. More than 10% said lower immigration will dampen housing markets.

“Rising unemployment and the risk of redundancies is likely to have a negative impact on the housing market over the coming months. Many people will choose to put off any major financial decisions, including buying or selling a house, until they are clearer on their income security and the economic outlook has improved,” said Jamie Durham, economist at PwC in London.

“The impact on the housing market is likely to be felt disproportionately in areas with large hospitality and tourism sectors, which have been most affected by the virus.”

More than 80% of nearly 100 respondents said the recovery to pre-COVID-19 levels would be “gradual,” or “slow and long.” The rest said it will be quick or it already has.

Indian and Australian house prices were forecast to fall this year and next on higher unemployment, while weak consumer confidence and fears of a second wave of infections has dampened chances for a sustainable rebound in China.

British home prices were forecast to fall this year. In Canada, they were expected to rise at a much slower pace than predicted three months ago and fall next year, with high household debt a real challenge.

“Add to that those who used to list houses on the Airbnb platform and could not rent them because of international travel restrictions. Some might also (just) want to sell.”

Migration to the suburbs from city centers as more people accustomed to working from home and who can seek space and gardens might ease some housing shortage in major urban areas.

Just over half of 72 analysts who answered an additional question predicted a move out of major cities in the medium- to long-term.

“It will be fine-tuning rather than mass-exodus,” said Miles Shipside, director at UK property website Rightmove. “Cities are convenient as the commute is shorter, but access to outside space and space internally are bigger factors. That might mean finding that in cities, or moving further out.”

(Reporting by Rahul Karunakar; Additional reporting and polling by correspondents in BENGALURU and BEIJING; Editing by Ross Finley and Angus MacSwan)

This column does not necessarily reflect the opinion of OVERWRITE.ai and its owners. This story has been published from a wire agency feed without modifications to the text.

Estate Agency rockstars use OVERWRITE.ai to instantly autowrite property descriptions in multiple languages, with a click.